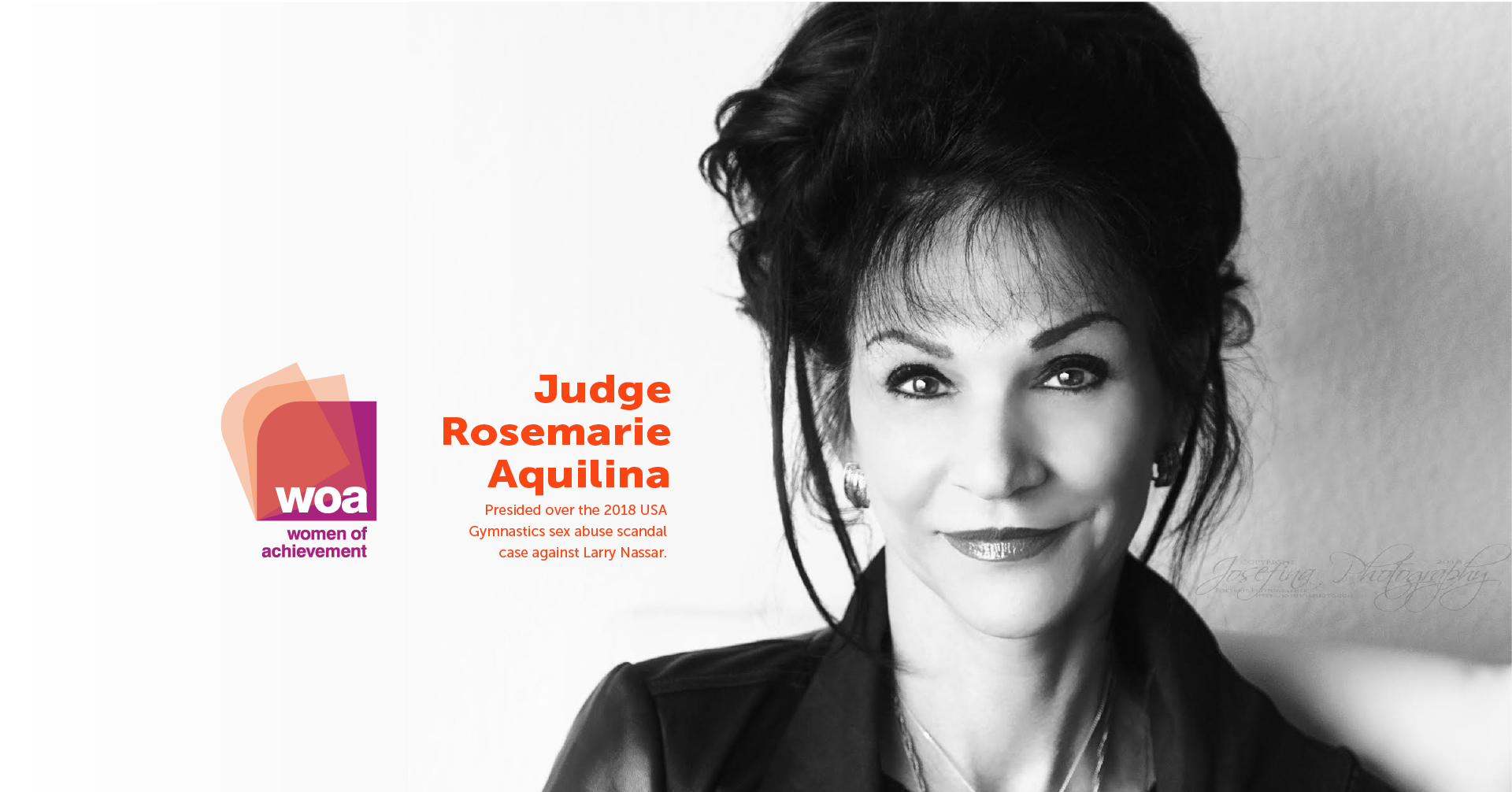 YWCA Spokane is proud to announce the Honorable Rosemarie Aquilina as our Keynote Speaker for our 37th Annual Women of Achievement Awards Luncheon.

Judge Aquilina presided over the USA Gymnastics Team sex abuse scandal involving Larry Nassar, sentencing him to 175 years in prison for the sexual abuse of hundreds of young women over a period of two decades.  By allowing every woman who said they had been sexually assaulted by Nassar face him in court, many say Judge Aquilina empowered these young women and redefined victim testimony.  Learn more in the recent Spokesman-Review Article.

Rosemarie Aquilina is an American Judge serving in Ingham County, most famous for sentencing Larry Nassar of the U.S.A. Gymnastics sex abuse scandal to 175 years in prison. In addition, Aquilina is the first female Judge Advocate General’s Corps officer in the Michigan Army National Guard, a licensed lawyer, author of two novels, daughter of immigrants, mother of five children, and grandmother to two children. Listen to her life story from her perspective in her interview with The Wall Street Journal.

“Some of the questions that are asked [to survivors]; why were you there, what were you wearing, how much did you have to drink, those are blaming questions and immediately shut down victims. Victims don’t want that. Victims need to be supported, need to be believed, and need to have a safe place. Then, of course, the legal system is brutal. They have to be in court, they have to testify. Their body parts may be on a screen in front of a jury… We need to honor victims and take action. I believe you. You matter. Let’s tell your story. I’m sorry this happened to you but you have nothing to be blamed for. The blame solely relies with your predator. Take time to heal because everyone heals on their own time.” – Shared by Judge Aquilina during Wall Street Journal interview.

Aquilina on the Larry Nassar Case

Praised for taking an advocacy role during the Nassar Case rather than remaining silent during testimony and sentencing, Aquilina is, among survivors, a role model of strength and courage. More than 150 women testified during the trial at Aquilina’s encouragement, and is considered among survivors, a “hero.” Watch her interview on the Today Show below. 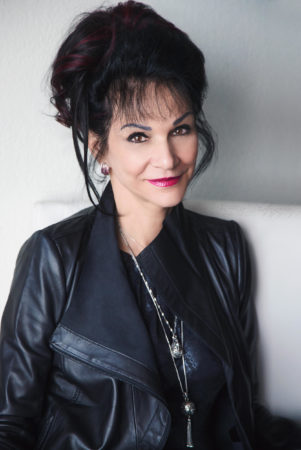 Aquilina was born in Munich to a German mother and Maltese father. She moved to the U.S. at the age of one year old and became a citizen at age 12. Aquilina earned her Bachelor of Arts degree in English and Journalism at Michigan State University in 1979. She then went on to earn her law degree from Thomas M. Cooley Law School (now called Western Michigan University Cooley Law School) in Lansing, Michigan in 1984.

After attaining her law degree, Aquilina joined the Michigan State Army National Guard and became the state’s first female member of the Judge Advocate General’s Corps. There, she earned the nickname “Barracuda Aquilina” due to her dedication to service and advocating on behalf of the soldiers she worked with, beginning her long career as an advocate. Aquilina is now a retired veteran, serving in the National Guard for 20 years.

Author, Woman of the Year

In addition to her incredible work in law, Aquilina is a published author of two fictional crime novels. She published Feel No Evil in 2003, and Triple Cross Killer in 2017, both receiving high reviews among critics and customers alike.

In 2018, Glamour Magazine recognized Aquilina as a Woman of the Year for giving a voice to survivors and truly listening to their stories. In addition, she is recognized for her rebuke of Nassar while he stood on the bench, and allowing his victims to come and speak as long as they wanted; a move which earned her much criticism from other judges and praise from survivors of sexual assault.

“If you’re affected by crime, you should be able to tell a judge. It’s the people’s court, it’s our laws, our community. It’s our Constitution. If someone doesn’t like what I do, unseat me. It’s that important.” – Shared by Aquilina during interview with Glamour Magazine

Glamour’s woman of the year

One year after Aquilina sentenced Larry Nassar to prison, she is still working to advocate for survivors and makes sure to give them the space to tell their story. She continues to serve in Ingham County and teach, both at Cooley Law School and Michigan State University. She still is contacted by survivors, not only of Nassar, and she continues to listen to their stories. She plans to continue to speak out for survivors so she can leave this world a better place.

“It’s really important for me to know that victims are heard, they’re believed, they understand that each judge, myself including, will do the best job they can to right the wrong. And, of course, you never can right this wrong.” – Judge Aquilina

YWCA Spokane’s 37th annual awards luncheon will be held Friday, October 11th, 2019 at the Convention Center from 11:30am – 1:30pm. Consider registering today to ensure your spot is saved for this powerful and empowering event. In addition to enjoying an opportunity to listen to Judge Aquilina, we will be celebrating the outstanding achievements of amazing Spokane women who will receive be honored for their impeccable successes and contributions to this community.

We will need many volunteers to assist with our largest event of the year. Let us know if you would like to volunteer and we will reach out to you as we get closer to the event. If you have any questions please contact our Volunteer Coordinator at volunteer@ywcaspokane.org. Thank you!

Donate In Honor Of A Woman of Achievement

If you are unable to join us for this year’s celebration on October 11th, but would like to make a donation in honor of our 37th Awards Luncheon and help YWCA Spokane reach our annual fundraising goal, click here to make a donation.

Thank you so much for helping ensure our doors are open to every woman and child who needs our help!

Thank you to our Deeply Valued Event Sponsors!

This awards celebration would not be possible without their incredible support. 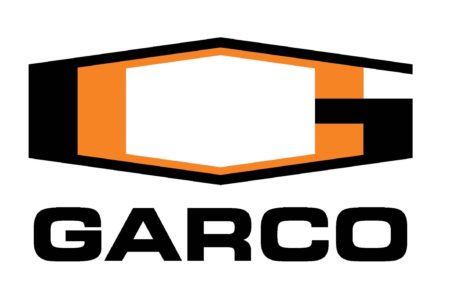 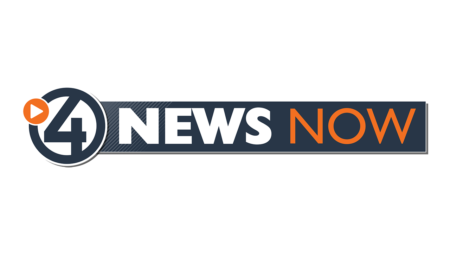 YMCA of the Inland Northwest

Join YWCA’s 37th annual Women of Achievement awards luncheon as a corporate sponsor. Learn more about the many ways you can engage with this inspirational event and make an incredible difference in our community.

Olivia is a graduate of Gonzaga University, where she studied English Literature, Women's and Gender Studies, Political Science, and Leadership. Taking her passion for women's empowerment and racial equality, Olivia joined YWCA Spokane in July 2018. Some of her favorite parts about YWCA Spokane are the agency's deep care for the community and powerful mission.

View all posts by Olivia Moorer →