Domestic violence is a pattern of controlling behavior used to maintain power in a relationship by one partner over the other.

While women are disproportionately victims, men are also victim of domestic violence. Reports show that 1 in 3 women and 1 in 4 men have experienced rape, physical violence and/or stalking by an intimate partner in their lifetime, and on average, 24 people per minute are victims of rape, physical violence or stalking by an intimate partner in the United States. While each case is unique, abusers use a range of abusive behavior to control their partners including physical, emotional, psychological, sexual, financial, and spiritual abuse.

Isolation from friends and family, using children as bargaining tools, and threatening deportation and/or using a victim’s legal status as a means to keep them in an abusive relationship are also common patterns of domestic violence abuse. Often, it is difficult to identify various forms of abuse, particularly when they are indirect or not as obvious as physical and/or sexual violence.

The Power and Control Wheel 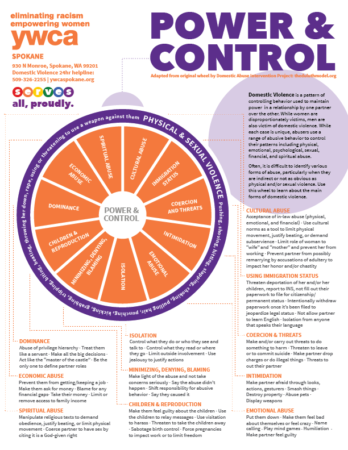 Physical and sexual assaults, or threats to commit them, are the most apparent forms of domestic violence and are usually the actions that allow others to become aware of the problem. However, regular use of other abusive behaviors by the batterer, when reinforced by one or more acts of physical violence, make up a larger system of abuse. Although physical assaults may occur only once or occasionally, they instill threat of future violent attacks and allow the abuser to take control of the partner’s life and circumstances.

The YWCA Power and Control Wheel diagram is a particularly helpful tool in understanding the overall pattern of abusive and violent behaviors, which are used by a batterer to establish and maintain control over the partner. Very often, one or more violent incidents are accompanied by an array of these other types of abuse. They are less easily identified, yet firmly establish a pattern of intimidation and control in the relationship. 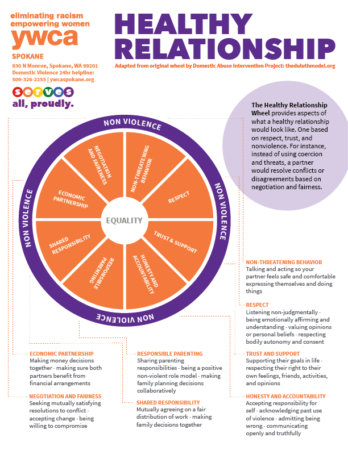 The YWCA Healthy Relationship Wheel is what a healthy relationship would look like, one based on respect, trust, and nonviolence. For instance, instead of using coercion and threats, a partner would resolve conflict or disagreement based on negotiation and fairness. The Equality Wheel was developed not to describe equality per se, but to describe the changes needed for men who batter to move from being abusive to non-violent partnership. Compare and contrast the Power and Control Wheel with the Equality Wheel use them to learn more about the many forms of domestic violence.

USING DOMINANCE
Abusing hierarchy of privilege. Treating them like a servant. Making all the big decisions. Acting as the “master of the castle”. Being the one to define partner roles

USING ECONOMIC ABUSE
Preventing the partner from getting/keeping a job. Making them ask for money. Blaming them for any financial gaps. Taking their money. Limit or remove access to family income

SPIRITUAL ABUSE
Manipulating religious texts to demand obedience, justify beating, limiting physical movement. Coercing the partner to have sex by citing it is a God-given right for spouses

USING ISOLATION
Controlling what the partner does, who they sees and talks to, what they reads, where they goes. Limiting their outside involvement. Using jealousy to justify actions

MINIMIZING, DENYING, AND BLAMING
Making light of the abuse and not taking their concerns about it seriously. Saying the abuse didn’t happen shifting responsibility for abusive behavior. Saying they caused it

USING CHILDREN
Making the partner feel guilty about the children. Using the children to relay messages. Using visitation to harass them. Threatening to take the children away

CULTURAL ABUSE
Acceptance of in-law abuse (physical, emotional, and financial). Using cultural norms as a tool to limit physical movement, justify beating, demand subservience. Limit the role of the partner to “spouse” and “parent” and prevent them from working. Prevent the possibility of remarrying by accusing them of adultery as a way to impact their honor and/or chastity

USING IMMIGRATION STATUS
Threatening to deport the partner and/or their children, report them to INS, not fill out their paperwork to file for citizenship/ permanent status. Intentionally withdrawing paperwork once it’s been filed to jeopardize their legal status. Not allowing them to learn English. Isolating them from anyone that speaks their language

USING COERCION AND THREATS
Making and/or carrying out threats to do something to hurt the partner. Threatening to leave them, to commit suicide. Making them drop charges. Making them do illegal things

FAQs about the Power and Control Wheel

(From The Duluth Model)

Why was the Power and Control Wheel created?
In 1984, the Domestic Abuse Intervention Project (DAIP) began developing curricula for groups of men who batter and victims of domestic violence. They were looking for a way to describe battering for victims, offenders, practitioners in the criminal justice system and the general public. Over several months, they convened focus groups of women who had been battered. They listened to stories of violence, terror and survival. After listening to these stories and asking questions, they documented the most common abusive behaviors or tactics that were used against these women. The tactics chosen for the wheel were those that were most universally experienced by battered women.

Why is it called the Power and Control Wheel?
Battering is one form of domestic or intimate partner violence. It is characterized by the pattern of actions that an individual uses to intentionally control or dominate his intimate partner. That is why the words “power and control” are in the center of the wheel. A batterer systematically uses threats, intimidation, and coercion to instill fear in his partner. These behaviors are the spokes of the wheel. Physical and sexual violence holds it all together—this violence is the rim of the wheel.

How does the Power and Control Wheel disproportionately affect certain populations?
The Power and Control Wheel represents the lived experience of women who live with a man who beats them and offers a more precise explanation of the tactics men use to batter women. We give attention to women’s experience because the battering of women by men continues to be a significant social problem. Men commit 86 to 97 percent of all criminal assaults and women are killed 3.5 times more often than men in domestic homicides. Additionally, young women between the ages of 16-24 experience the highest rates of intimate partner violence.

Battering in same-sex intimate relationships has many of the same characteristics of battering in heterosexual relationships, but happens within the context of the larger societal oppression of same-sex couples. Resources that describe same-sex domestic violence have been developed by specialists in that field such as The Northwest Network of Bi, Trans, Lesbian and Gay Survivors of Abuse, www.nwnetwork.org. According to the National Coalition of Anti-Violence Programs report, LGBTQ people “experience similar, if not higher, rates of IPV (intimate partner violence) compared to their cisgender or heterosexual counterparts.” For more information on how domestic violence particularly affects non-cisgender women, please visit “Ending Violence Against All Womxn”

The wheel makes the pattern, intent, and impact of violence visible.

If at any time you feel it is unsafe to be visiting this website, you can click on the Escape Button located in the upper right corner of the site. Please use your computer with caution if you are in a dangerous situation. Learn more about computer monitoring.