Take a look at upcoming events and activities that you can engage in with YWCA Spokane. Click on an event or activity to learn more.

Join YWCA Spokane during Week Without Violence as we engage the community with key Spokane experts and YWCA staff in a progress-minded conversation about how domestic violence survivors have been impacted by recent legislative changes. 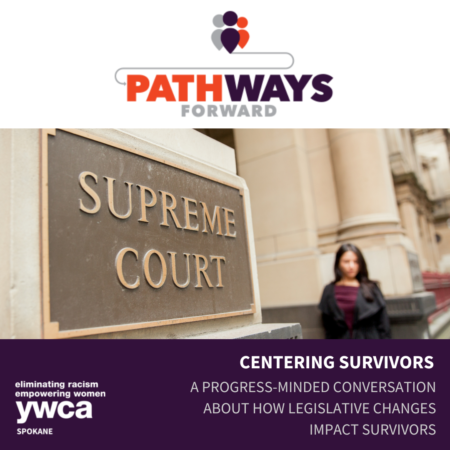 Sarah Dixit is no stranger to YWCA Spokane. She was awarded this year’s Young Woman of Achievement award.

Sarah began her career in advocacy and social justice with Planned Parenthood of Greater Washington and North Idaho and has shown an incredible amount of devotion to the work of human rights. She helped Planned Parenthood launch the Raiz program – which works to build relationships with the Latinx community.. This hard work especially shined on participating for the 2020 Census, state and county redistricting and voter access – all fundamental building blocks of our democracy. In 2021, she completed a fellowship with Western States Center, focusing on the connection between anti-reproductive rights movements and white nationalist groups.

Sarah is connected with the progressive movement in the Northwest and across the country. Her advocacy also involves serving as co-chair for Spokane’s Asian Pacific Islander Coalition. She is committed to dismantling racism in every form and has helped lead the conversation in Spokane to address hate towards the Asian community by moderating numerous Spokane Coalition of Color panels.  She helped pass an ordinance to protect immigrants from warrantless search in Spokane from Immigration Customs Enforcement and Customs Border Patrol. In previous legislative sessions, she helped pass the Reproductive Health Access For All Act that expanded trans care and student health plans. She also fought to get undocumented patients included in the Washington State Budget for Medicaid coverage. At each action, she has made direct impact with countless people, met with elected officials and worked to hold local leaders accountable.

She was also a Fulbright Scholar and Lecturer at Marie Curie Sklodowska University in Lublin, Poland (spring 2002) and served as a Legal Specialist for the ABA-CEELI program in Pristina, Kosovo, in 2006.

She has a long-standing commitment to social justice and human rights issues, particularly those that affect women and people with disabilities. She has provided pro bono post-conviction assistance in death penalty cases at the state and federal levels and is a member of the Advisory Committee of the Washington Amnesty International “Stop Violence Against Women” Campaign, as well as a member of the Peace and Justice Action League of Spokane and the Inland Northwest Death Penalty Abolition Group. She’s also on the Board of Directors of University Legal Assistance where she co-founded the Domestic Violence mini-clinic, and has been involved since 1990 with the Seattle-based Washington Protection and Advocacy System that provides legal services to people with disabilities, serving as the chair of the Board of Directors and the chair of the Mental Health Advisory Council.