Celebrating 118 years of services to the community

Since 1903, YWCA Spokane has been helping women and children overcome social, economic, and personal barriers in order to accomplish their goals and achieve healthier and more fulfilling lives. Today our areas of focus are supporting victims of intimate partner domestic violence (DV), promoting early childhood education, and confronting racial and social justice issues that negatively impact our clients and our community.

The vision that propels our DV work is a community in which DV is no longer tolerated. For 40 years we have embraced this vision, establishing a continuum of wrap-around services: 24-hour Helpline and Safe Shelter, Counseling Center, Mental Health Services, Child Advocacy, Civil Legal Assistance, Legal Advocacy, Economic Empowerment Advocacy, and free drop-in childcare.

In 2020, we served over16,500 survivors and their children. Our Early Childhood Education and Assistance Program (ECEAP) supports families living at or below 110% of the federal poverty level. We provide 3- and 4-year-old children with the social and learning skills necessary for successful entry into kindergarten, and we support their parents as they progress towards self-sufficiency. Each year YWCA ECEAP serves over 100 families at three distinct sites.

By working at the intersections of inequality, poverty, and DV we are able to disrupt longstanding societal patterns of trauma. 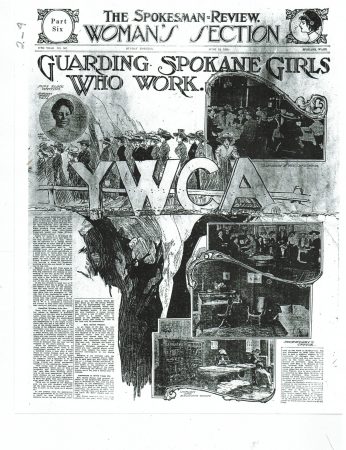 A small group of people met in a room of the YMCA to discuss starting a branch of the YWCA. Four rooms were then secured in the Symons Building to rent, which was made possible by a gift from Mr. John Finch. The Spokane YWCA receives its charter on April 13, 1903. Ninety women pledge to join the new organization. YWCA offers the first night school class for women in the city. English as a second language was taught to 20 young immigrant women.

1914
YWCA moves to Rookery Building
“A spirit of cheerfulness and hope once more prevails in YWCA circles.”

1937
Mr. and Mrs. Eugene Enloe offered the Old Spokane Amateur Athletic Club Building at Main and Monroe as a gift, which became the YWCA home for the next 28 years.
“When one wonders how a comparatively small group of women dared to inaugurate the big tasks it did and raise huge sums of money, one can comprehend their daring when one reads that other big, expensive tasks were everywhere being talked of and started by the enterprising and prosperous little city by the falls,” Ellen Ferris, Board President 1972-1973.

1942
World War II Years: YWCA Traveler’s Aid at depots was extended to 24-hour service to aid stranded women and children.
The Quest Club is organized for young women of Japanese ancestry to help with their relocation after internment.

1971
The YWCA adopts its main imperative: “To thrust our collective power towards the elimination of racism wherever it exists and by any means necessary.”
“In a nutshell, here is what the YWCA is all about. It is an international fellowship bound together by membership, rooted in its local community, yet bound by fellowship in Christian concern for the whole world; impelled by its purpose to come to grips with the problems and concerns of each succeeding generation of women and girls, and to provide the kind of program that helps them find life and find it more abundantly.” Margaret Cuenod, recounted in YWCA historical records by Ellen Ferris, Board President 1972-1973

1991
YWCA offers the Mentoring Program (now called Women’s Opportunity Center) to assist women who are unemployed or under employed with career development support and networking.

1995
“Rallying for Peace & Safety” Sounding Off Against Domestic Violence

2000
With an award from the Washington State Housing Trust Fund, YWCA purchases a new domestic violence safe shelter, doubling the number of women and children served.

2002
With funds from the office on Violence Against Women, the YWCA commences a Civil Legal Assistance Center for domestic violence victims.

2005
YWCA and YMCA commence a capital campaign to create a first-in-the-nation co-location of YWCA and YMCA facilities and programs.

2016
YWCA expands its ECEAP program to a total of five sites serving 130 children.

What we do matters