“We are honored to have Admiral Howard representing as our luncheon keynote,” states Jeanette Hauck, CEO of YWCA Spokane. “The Navy was founded on three pillars – honor, courage and commitment – Admiral Howard exemplifies those foundations both personally and professionally, and so do all of our Women of Achievement honorees.” 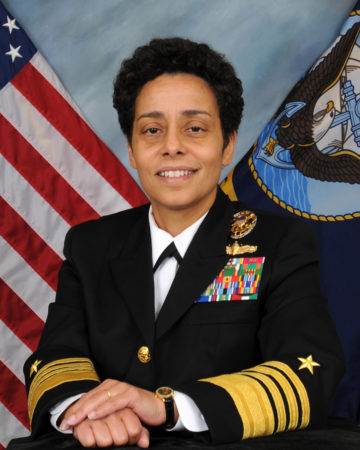 Born when female participation in the military was legally capped and women were not allowed to become generals or admirals or to attend service academies, Admiral Howard shattered every glass ceiling. She was the first women to command a U.S. Naval Ship, achieve the rank of four-star admiral and the first woman to be appointed to the position of vice chief of naval operations (the second highest rank in the Navy). She was also the first African-American woman to reach the rank of three-star and four-star in any branch of the U.S. Armed Forces and the first African-American woman to command a ship in the Navy.

A veteran of operations that included North Atlantic Treaty Organization (NATO) peacekeeping, Indonesia tsunami relief, Desert Storm and Iraqi Freedom, she was thrust into the international spotlight in 2009 as leader of the counter-piracy task force that rescued civilian Captain Richard Phillips from Somali pirates. The rescue was later depicted in the film Captain Phillips, starring Tom Hanks.

Admiral Howard led sailors and marines multiple times in her career as the commander of a ship, and expeditionary task force and a naval theater. This culminated in her final post as Commander, U.S. Naval Forces Europe and U.S. Naval Forces Africa, in which she simultaneously led NATO’s Allied Joint Force Command Naples with oversight on missions from the Western Balkans to Iraq.

“How many of us have had our hearts broken for whatever reason yet find the courage to continue to reach out for love. Emotional vulnerability is true strength to me.” Admiral Michelle Howard

As the second-highest ranking officer in the Navy, Howard had oversight of more than approximately 600,000 active/reserves uniformed, and civilian personnel. In 2016, Admiral Howard was appointed by the President to serve as commander of U.S. Naval Forces in Europe and Africa and the Allied Joint Forces Command in Naples, Italy, making her the first woman four-star admiral to command operational forces. She retired from the Navy in 2017 after 35 years of distinguished service.

Ever forward looking, as vice chief of naval operations, Admiral Howard placed a special focus on cyber culture and information security in the digital age. Ever forward looking, after retiring Admiral Howard turned to the future of cyber security and became a visiting professor at the Elliott School of International Affairs at George Washington University, where she focused on the cyber domain and associated issues in strategy and policy until 2020. Today, she continues to promote cyber security in her role serving on the board of directors for IBM.

Admiral Howard was only a few days into her new role as head of a counter-piracy task force in the Arabian Sea when a U.S. ship was hijacked and its captain taken hostage by Somali pirates. The successful rescue, chronicled in the movie Captain Phillips, starring Tom Hanks, wasn’t the result of technology, weapons, or military might. According to Admiral Howard, diversity was the “secret weapon” that won the day. Based on this experience and others, Howard argues that diversity—both inherited and acquired — is essential to innovation.

Celebrating & Empowering Women In Spokane Since 1903

For every great achievement experienced by a woman there is a community of leaders and future leaders who witnessed what is possible, not only for themselves but for their communities.

Founded in 1903, YWCA Spokane is part of the oldest and largest multicultural women’s organization in the world. Across the globe, we have more than 25 million members who are dedicated to providing safe places for women and girls, building strong women leaders, and advocating for women’s rights and civil rights. In its 40th year, YWCA’s prestigious Women of Achievement awards recognition event has evolved into Spokane’s largest celebration of outstanding women. The enthusiasm and inspiration we all feel celebrating the accomplishments of a diverse group of women is rejuvenating, igniting us to step into action and create change in our own lives, homes, careers, and communities.

In addition to an awe-inspiring keynote, this celebration will honor extraordinary women in the region and further the mission of YWCA Spokane by raising vital funds. In it’s 40th year, the Women of Achievement awards event has grown into the agency’s largest and most critical fundraiser with a goal of raising $350,000 in service to over 16,500 women, men, children, and families impacted by domestic violence, homelessness, and unemployment.

We will need many volunteers to assist with our largest event of the year. Let us know if you would like to volunteer and we will reach out to you as we get closer to the event. If you have any questions please contact our Volunteer Coordinator at volunteer@ywcaspokane.org. Thank you!

Donate In Honor Of A Woman of Achievement

If you are unable to join us for this year’s celebration on March 24th, but would like to make a donation in honor of our 40th Awards Luncheon and help YWCA Spokane reach our annual fundraising goal, click here to make a donation.

Thank you so much for helping ensure our doors are open to every woman and child who needs our help!

Thank you to our Deeply Valued Event Sponsors!

This awards celebration would not be possible without their incredible support.

Join YWCA’s 40th annual Women of Achievement awards luncheon as a corporate sponsor. Learn more about the many ways you can engage with this inspirational event and make an incredible difference in our community.